It’s time to launch another Glassetonbury bracket! We’ve searched for artists across the planed to bring you 32 new songs by some of the world’s most talented up-and-coming artists. The winner of the tournament will earn a featured interview on our website, a live stream/fan Q&A hosted by Glasse’s Instagram, and more.

Let’s take a look at our bracket:

Each matchup below will feature links to the songs, a brief description of each song and artist, and a poll for you to cast your vote. Polls will close on Saturday, July 24th at 1:00 p.m. CST, and voting is limited to one vote per 24 hours. To prevent botting, we equip all of our polls with CAPTCHA protection, and while this is a necessary step to preserve the integrity of the tournament, sometimes this leads to problems when trying to vote on multiple polls at once. To ensure that your votes are properly counted, refresh the page before voting on a new poll, and make sure to click “Vote” again after you pass the CAPTCHA protection. Thank you for your patience and understanding.

Campaign for your favorites in the comments and on social media, and don’t forget to tag and follow us on all platforms @glassefactory!

“Waves of Grief” – Emma Grace vs. “Gamble” – The Famous Daxx

“Waves of Grief” comes from Chicago singer/songwriter Emma Grace. The song, which was written after her grandfather passed and the worldwide lockdowns began, released on April 9th and would make a great listen for fans of Wild Child. Meanwhile, “Gamble” comes from the UK’s The Famous Daxx and was recorded by an all-female band in London after being produced at home during the lockdowns. It’s the second single from the singer and provides a nice bit of mid-tempo alternative rock. It released on July 8th.

“Wheatfield” – Save Henry vs. “Before the Morning” – Josh Steinhart x Annie Bacon

“Wheatfield” comes from Nashville Americana/bluegrass band Save Henry. It features a wholesome energy that falls somewhere in between Pinegrove and Jason Isbell, with an extra dose of traditional country. It released on June 25th. Meanwhile, Brooklyn’s Josh Steinhart and Michigan’s Annie Bacon share the spotlight on the folk/roots duet “Before the Morning,” which came out on July 9th. Reminiscent of bands like Dawes and taking influence from vocalists like Stevie Nicks and Josh Ritter, the song features powerful harmonies and tasteful steel guitar.

“Sweetwater” – Baby.Girl vs. “Promise You Will Love Me” – Daniele Alan-Carter

“Darkside” comes from Southern California’s Casual Vice and released on July 2nd. It’s a vibey, upbeat indie-pop song with a nice groove and a memorable hook. It’s a single from their upcoming album “On The Exotic.” Meanwhile, Stevie Stubborn released his debut single “Tough Love” on July 9, 2021. The Chicago-born South Florida resident formerly toured with the band Radical Something before making the decision to branch off on his own, and his new song brings a guitar-driven pop/dance track to the table that feels well-fit for one of South Beach’s iconic clubs.

“Heavy” comes from Nashville-based pop artist Grant Terry and feels like it would fit alongside artists like Matt Maeson well. The piano ballad is self-reflective and emotional, and the song came out on July 2nd. Meanwhile, “Leaf Of Stone” comes from Brisbane, Australia psych/indie-rock quartet Fingerless. The “catchy, sultry ballad” released on July 7th and features a huge, anthemic build-up with massive production and stacks of guitar and vocal layers that make the song feel larger than the product of just four people.

“Need A Light?” is a jazzy, smooth hip-hop collaboration from Denver’s Paradox and England’s ReFlex the Architect that features Canadian rapper Moka Only. This June 26th release is a chill summertime track that flows easy and would make a great playlist add. Meanwhile, “Bad Memory” covers a different side of rap. A trap beat with auto-tuned vocals that call to mind artists like Travis Scott and Kevin Gates, this track from Nashville rapper Profiit came out on June 18th.

“Living in the Pain” was written and recorded during the COVID-19 lockdowns by “Chicago Folk Rock n’ Roll” band Sun Beard. The band felt it was “important for [them] to make art born of this significant time in our world.” They claim to have found solace, release and camaraderie in the music” of the song, a cathartic, relatable folk-rock song that fans of artists like Tom Petty might like. It was released on July 9th. Meanwhile, “Wild Side” came out on June 4th and comes from Chicago funk-pop band The North 41. It features washy vocals and a relentless groove that feels reminiscent of bands like The Main Squeeze.

UK saxophonist Snake Davis, who has previously worked on projects with artists like Calvin Harris and Klingande, released his first solo track in about two years with “JDH!8,” and the track calls to mind a modernized version of Herbie Hancock‘s “Cantaloupe Island.” The song released on July 2nd. Meanwhile, “Rise Above” comes from UK rapper Renee Stormz, and she raps over a fairly sparse instrumental that allows her to show off her speed and cadence. The vibey hip-hop track came out on July 7th.

Italian producer 2 Dialogue‘s “Let You Know” is a pure chill-hop instrumental borne of the first round of COVID-19 lockdowns. Released on June 18th, the lo-fi, downtempo song was “created with reverberated ambient sounds, soft vocal samples and simple melodies disturbed digitally.” Meanwhile, “Gaacher Blitz” comes from experimental London collective Kyoto Kyoto. This marks their debut single, and the track is “rooted in Krautrock, Anatolian psych and Glaswegian punk.” It came out on July 2nd.

Nashville-based funk-rock band Down Boy released “Send Me On” on June 26th, and it’s an instant earworm that showcases the band’s incredible musicianship and ear for groove. Meanwhile, “Vibez” is a mellow, bar-heavy hip-hop track with a menacing beat and a smooth vocal delivery from North Carolina’s Mo C. It came out on June 22nd.

“POWERS” is a hip-hop track that’s equal parts hard and jazzy and comes from Kosie and friends. The rappers “felt compelled to write a song that puts the listener in the shoes of a young black man in today’s America.” They sought to answer the question, “If he had a superpower, what would it be” The track released on May 14th. Meanwhile, The Uncle Steves deliver a “hypnotic, optimistic” indietronica/indie-pop track with “We’re Gonna Be Alright Now,” which released on July 6th. Reminiscent of artists like Beck and Talking Heads, it’s repetitive in an earwormy way. This song will definitely get stuck in your head.

John Thomas channels his inner Jon Bellion/Ed Sheeran with the acoustic pop ballad “Never Die,” a pretty, romantic song that came out on July 9th. It shows off his vocal range and feels both vulnerable and powerful. Meanwhile, “Out Of Breath” comes from Texas rock band HIGHDIVE. While this song is one of their ballads, it still feels huge and showcases the band’s ear for well-produced rock with catchy melodies and rock-solid instrumentation. It released on June 18th.

“Her” marks Greek artist Stratos Fygetakis‘ first release in two years, having been released on June 25th. It’s a stripped-back, barebones acoustic track about “unrequited love and the struggle of forgetting someone who doesn’t love you back.” Meanwhile, “Shiver” comes from indie-rock singer Micky James. Musically, this lands somewhere in between Modest Mouse and Oliver Tree. It released on June 24th.

“Dig Yourself” comes from North Dakota-born, Nashville-based country sister duo Tigirlily and released on June 11th. It’s a smart, catchy country track that centers around a self-absorbed antagonist blinded by their own narcissism. Meanwhile, “Space Station” comes from French DJ Greg Kozo and released on July 7th. It’s been described as “a cosmic lo-fi deep-house song and a timeless journey in full weightlessness.” It offers choppy vocals and an ambient instrumental.

“Little Bird,” a dancy, upbeat collaboration from Arlo and Emi Grace‘s collaborative effort Tover, released on July 9th. It features choppy vocals, a Latin-inspired instrumental, and a groovy outro worth sticking around for. It’s inspired by human consciousness and the collective consciousness we share. Meanwhile, Canadian rapper Lex Leosis brings a raspy flow and a bouncy energy to “That Feel,” and she brings tons of bars and energy to an R&B instrumental that’s loaded with key changes and beat changeups. The song came out on July 9th.

“Spins” is a funky indie-pop song from Brooklyn-based band Supertaste. It was released on July 7th and features a pulsing bass line and syncopated synth rhythms. Fans of DOUBLECAMP or The 1975‘s funkier stuff would love this song. Meanwhile, “AYUKEN” comes from Tri-State rapper Passport Rav, who previously introduced us to his deep boom-bap flow with “Free Counseling” in Glassetonbury, Vol. 2. The song is lyrical and bar-heavy and features a video dedicated to Rav’s love of Street Fighter.

Don’t forget to follow our official Glassetonbury playlist on Spotify! 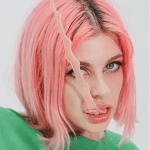 DAVA’s “Sticky” Is A Love Song With Euphoric Bounce