Portugal. The Man and alt-J Are A Dynamic Duo on Current North American Tour

On Tuesday March 3rd, the English Indie Rock trio, alt- J, joined forces with Portugal. The Man for the third show of their joint, North American tour at the Municipal Auditorium in Nashville, Tennessee. Portugal. The Man set the tone with an all encompassing set full of hits from across their discography, killer covers, and an unreal light show. Portugal. The Man’s live version of studio recordings truly highlighted their versatility, with most songs transcending into psychedelic, punk, and hard rock jams. Their covers included Nirvana, Pink Floyd, and crowd favorite, “Dayman” from the TV show It’s Always Sunny In Philadelphia. The double neck guitar, liberal use of fog, and an insane laser show created a high energy environment of pure Rock n Roll.

After a quick set change, alt-J appeared on an elevated stage within a transparent box covered in colorful, moving graphics. From a candlelit stage, to a field of cherry blossoms, to an overlay of Joe Newman, the lead singer, the visuals were top-tier and matched the vibe of every song perfectly. The set included songs from all three of their albums, and plenty of deep cuts for the extremely loyal alt-J crowd in attendance. alt-J controlled and fluctuated the vibe at their will, taking the crowd on a journey through their discography. The angelic vocals and guitar, mellow synths, and flawless drums brought alt-J studio cuts to another level that must be seen live. During a break in the set, alt-J used their 3D graphics to encompass the stage in a massive graphic of the Ukrainian flag in a heartfelt, meaningful show of support to Ukraine. The set finished off with their biggest hits, and every person in attendance was dancing. After thanking the crowd, they left the stage with “Never Gonna Give You Up” by Rick Astley and the party kept going despite the house lights turning on.

The show as a whole was an absolute master class in stage production, crowd interaction, and musical talent. Both bands brought their own product and energy to the stage, and they complemented each other perfectly to create a night of amazing music. It is apparent that the two acts have dialed in their craft through years of experience and touring, and the current tour is worth marking your calendar for. 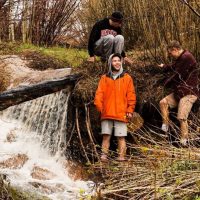 Sam Pinsly Author
Sorry! The Author has not filled his profile.
×