Pop-soul songstress Dakota Ryley has never been afraid to tell it like it is, but her upcoming release shows a softer side of that honesty. “My Own Advice” hits on themes almost all of us have experienced at some point, especially during quarantine. Dakota’s vulnerable lyrics about taking care of others to a point of forgetting her own needs glisten over an acoustic track meant to underscore rather than distract from the song’s meaning. Coming off the heels of four upbeat singles released in 2020, this song in particular captures an entirely new feeling while showcasing Dakota’s signature lighthearted honesty and sultry vocals. We talked to her about “My Own Advice,” perfectionism and where she sees her music in the future. With more music on the way and the potential for live performances, Dakota is a rising artist to keep an eye on.

You started writing music at 13. How did you get started and what were those first few songs like?
I grew up taking music lessons — guitar, piano, voice. And I also wrote a lot of poems, for better or for worse. Every day after school I would go up to my room and play around on piano by ear, then I thought maybe if I just sing random words it’ll sound good. I did that for a bit and my mom signed me up for a four week intensive songwriting camp. Through that I just learned that I love to write music and started working more on how to correctly write a song. But like, God, the first few songs were like my eighth grade crush with their name in the first verse. Nothing rhymed, there was no structure, but I loved it and thought it sounded great at the time.

So you were raised in New York but relocated to Nashville to really hone your craft. What convinced you to make the move, and what differences have you noticed since being here?
I was an athlete for most of my life, and before I went to that songwriting camp I didn’t really even think of music as anything more than a hobby. Then as we started doing some research my mom let me know that I could actually turn it into a career. So she encouraged me to come to Belmont and I’ve kind of stayed here, but I think there’s a culture shock where if you grew up in Music City, music is automatically a part of your life. Whereas New York has a lot of music, but generally in the Northeast it’s not as real to say to someone that music is going to be my career. So I think that’s been the biggest difference.

Your lyrics hold a lot of honesty and vulnerability. Where do you find the strength to be that open or speak your mind even when it’s difficult?
It’s definitely always been a personality trait of mine, and I’ve actually learned how to be more respectful with it as I’ve gotten older. You know, as a kid you have no filter but when you’re older you learn to sugar coat, and I just don’t love doing that. I guess that’s where it comes into my music because I’m just gonna say what I have to and find a creative way to do that. I would just rather you know how I’m feeling than tell you something that’s not true.

How do you describe your genre and who are some inspirations?
I definitely would say pop-soul, but I do have R&B elements. I grew up on Toni Braxton, and obviously Destiny’s Child and Beyonce. I listened to Amy Winehouse who was more soul-blues, and my parents played Motown like Luther Vandross, Barry White and The Supremes. So I fell in love with that kind of music. That’s why I try to say soul, because for more contemporary people it’s just about using live instruments in pop like Bruno Mars.

Your new single is much more stripped-back and acoustic. What inspired the new sound?
I actually had a hard time deciding on releasing this song because it’s not as upbeat and I would love to lift people up from this year from hell. But when my songwriter Anna Kline showed this to me I shed a tear and I felt that it was so reflective of how I’ve been feeling for quite some time. Throughout this time I’ve told other people that it’s okay or that I’m fine while lifting other people up when I was going through plenty of hard stuff, and I’m sure we’ve all been feeling that way. I realized I was holding in so many emotions around the same time Anna sent me the song. It actually spoke to how I was feeling instead of pretending like I’m going to release some happy song for no reason.

“My Own Advice” hits on a lot of themes of supporting others and finding support for yourself — things pretty much everyone has thought about in quarantine. What has your own experience been like and how have you worked toward that balance of taking care of yourself and others?
I definitely pushed down emotions. And it sounds really cliche but my way of bringing positivity into my life when I’m going through something is to lift other people up. But my boyfriend or mom would always remind me that it’s okay to be sad or to sit with those uncomfortable emotions. I’m usually a constantly-moving person with my schedule booked minute by minute, and that’s definitely not the case when the world is shut down. So I got to be really introspective and realize it was gonna be okay even on the days when it didn’t feel okay.

How do you decide when a song is finished?
I’m so picky. If you know about the Enneagram I’m a One, so I’m a perfectionist, performer and the type that can’t stop a project until it’s absolutely perfect. But generally making sure that we communicated effectively and said what we needed to say. I think when I hear the song and just want to jump out of my chair, that’s what makes it finished. It’s obviously different for every song, but that pure excitement that feels like it’s a piece of yourself is a good indicator.

In the coming year, what are you looking forward to most in terms of your music?
The direction we’re going in is to gear everything towards more live performances. And obviously that’s wishful thinking but I think if you manifest it, it will come true eventually. I think of myself first as a performer, so I want the performances to be that much better. Everything is so digitized now that you could just lay a drum down without ever lifting your hands, but growing up on Motown showed me that the trial and error is what made the performances better.

“My Own Advice” comes out on October 21st across streaming platforms. 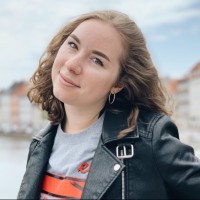 knipperkatie Subscriber
Katie Knipper is a storyteller from central Florida who currently lives in her dream city — Nashville, Tennessee. In May 2020, she graduated from Belmont University in the midst of a global pandemic with a B.S. in Communication Studies and Journalism. Though she communicates mainly through print media, she also has experience in front of and behind the camera. Her internships and experience as Arts & Entertainment Editor at the Belmont Vision have sharpened her skills as an entertainment journalist while keeping her well-rounded and open to stories from different areas.
follow me
×

knipperkatie Subscriber
Katie Knipper is a storyteller from central Florida who currently lives in her dream city — Nashville, Tennessee. In May 2020, she graduated from Belmont University in the midst of a global pandemic with a B.S. in Communication Studies and Journalism. Though she communicates mainly through print media, she also has experience in front of and behind the camera. Her internships and experience as Arts & Entertainment Editor at the Belmont Vision have sharpened her skills as an entertainment journalist while keeping her well-rounded and open to stories from different areas.
follow me
Latest Posts
artist interviewdakota ryleyinterviewmusic reviewNew Musicnew single