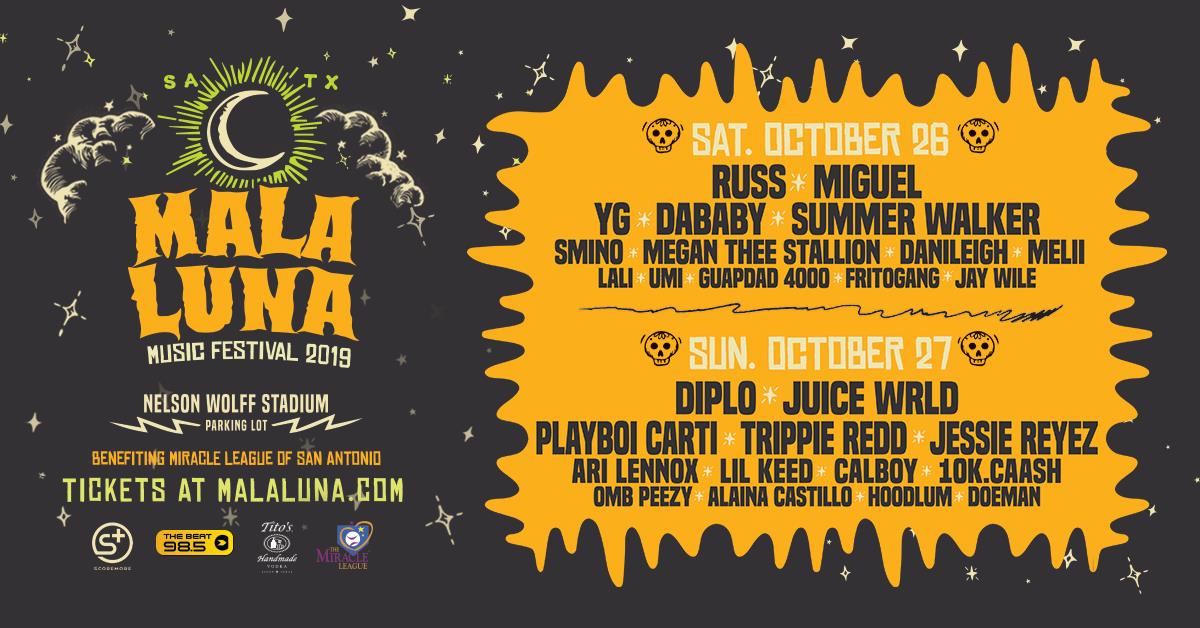 Mala Luna Music Festival is about to take over San Antonio on October 26th- 27th at the Nelson W Wolf Municipal Stadium. Some of the biggest names in the rap game right are coming from all over from the States to put on what is expected to be one of the hottest festivals in the state of Texas ( Literally, have yall felt Texas heat?). It’s Not every day you come across a Multi-day, music festival that is not only fun but also cost-effective! As they say, “everything’s bigger in Texas” so that should put an idea in your heads of what’s about to go down in October. Last year was insane! Just check out this recap video!

Okay, let’s get into this lineup. Day one we have the fly, sexy, smooth RnB King Miguel coming to steal our soul with his sultry vocals even more incredible sex appeal. You can also expect to see performances from YG and Dababy who seem to have one of those “you should be apart of this?” crowds. You know? The ones you see online who make you feel like you just missed out on one of the craziest events of a lifetime… yeah, that one. Highlighting day one will be  Summer Walker and all I’m saying is…. Catch this woman live while you can! She is one of the hottest new names in music and she will be selling out arenas worldwide in no time.

Day two will bring us the iconic sound of Diplo, a man who has established such a well-known brand that you can put him on a lineup for any kind of festival and he will ALWAYS sell out. JUICEWORLD will also be there hopefully performing his latest single with Benny Blanco “Graduation”. You can also catch Ari Lennox giving a performance that is sure to be as soft and smooth as “Shea Butter Baby”.

So what better way to spend the weekend before Halloween than Mala Luna? Not to mention, people will be coming in costumes which pretty much doubles the excitement! TWO IN ONE BABY! So go ahead and start prepping your fits, getting you festival crew together, and booking your tickets because this is the place you’re going to want to be.

5 Artists You Need To See At River Revival Festival!