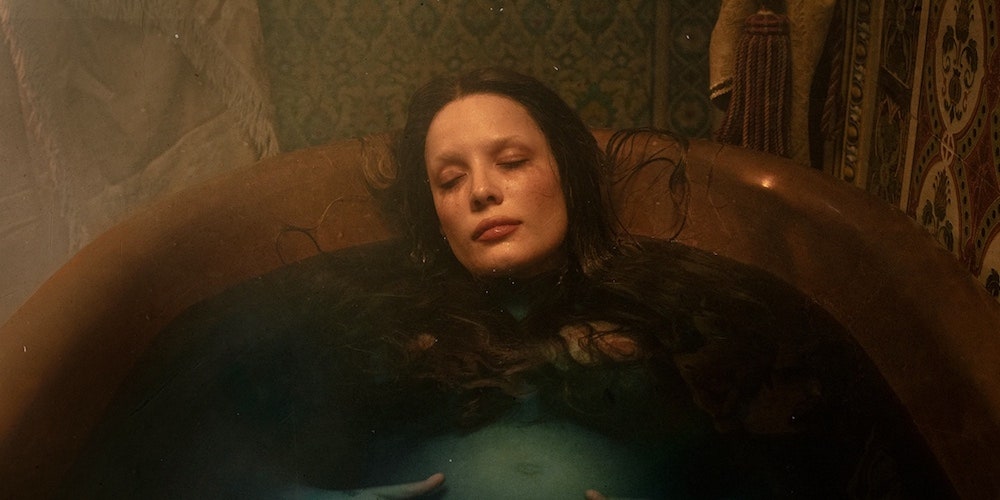 On Friday, August 27th, Halsey released their fourth studio album, If I Can’t Have Love, I Want Power. The career-defining album, which features 13 songs penned by Halsey, was produced by Trent Reznor and Atticus Ross. Known for their work in Nine Inch Nails and as Oscar, Golden Globe and GRAMMY®-winning film/television composers, If I Can’t Have Love, I Want Power is the first album the pair have produced for another artist. Dave Grohl, Lindsey Buckingham and Pino Palladino guest on the album. See below for track listing. Anticipation has been building since early July, when Halsey unveiled the album’s cover art at The Met Fifth Avenue in New York City.

If I Can’t Have Love, I Want Power follows Manic, which debuted at No. 1 on Billboard’s Top Current Albums chart.  It was the first album of 2020 to be certified Platinum in the U.S. and attained Platinum certification in numerous other countries also.

Halsey continues to push creative boundaries, exerting an influence and impact beyond music. Her first book, I Would Leave Me If I Could: A Collection of Poetry, debuted on The New York Times Best Sellers list last November. Named as one of TIME’s 100 Most Influential People of 2020, they have won over 20 awards, including an AMA, MTV VMA, GLAAD Award, the Songwriters Hall of Fame’s Hal David Starlight Award and a CMT Music Award. Halsey recently introduced about-face, a multi-dimensional makeup line for made for everyone. Halsey continues to speak up for important causes such as disenfranchised youth, women’s rights, mental health and the LGBTQ community.

Here are our thoughts on the album, with some breakdowns of our favorite tracks:

The beginning of the album features “The Tradition,” which sounds like the introduction of an epic poem, describing the main character and the problems they have yet to face on their quest. The lyrics break down a character description as if there were a discussion about the hero rather than the hero talking about herself. Alluding to her beauty and inner darkness, the clash between the two makes for the ultimate character profile and sets the scene for what’s to come in the album.

Continuing along a similar thread as the previous track, “Bells In Santa Fe” instrumentally blends in while it trails through the first real chapter of the story. It blends in the departure of the main character from the last relationship she was in, that was keeping her from blooming to her full potential. The track then takes a turn as Halsey sings “All of this is temporary” on repeat before the track’s conclusion with an electric guitar playing in the background.

Changing the tempo, “Easier Than Lying” blends in rock and alternative tones into the scene with a fresh concept and sound for Halsey’s music journey. Blending in a fun, quick tempo with a hard-rocking chorus, the lyrics lie underneath its cold wash of dark and empty and expresses itself to its heart’s content.

What seems at first like a self-empowerment track, “Girl Is A Gun” reveals another layer underneath as you listen. At first glance, there are the elements of danger and display of power, but listening deeper, it implies something far different beneath the surface. There’s the internal struggle and self-destructive tendencies and the front that’s put on to appear confident and strong. This theme continues throughout the rest of the album as Halsey battles her inner demons and struggles to break free.

“You asked for this,” singles out Halsey’s experiences in breaking free from the same old thing and feeling at the worst about it. This track displays the problem’s she’s facing out on a silver platter as she tries to boost her own confidence and self-esteem, telling her to be a big girl and face the consequences of her own actions, because she “asked for this” change and next step in her life and it’s going to take some fighting to find what she’s seeking out.

An acoustic track, “Darling” sounds like a modern day lullaby, written for her child. “Only you have shown me how to love being alive,” she sings. The ultimate love song written for a love of her life that she witnessed growing from within her, it is sweet, heartfelt, and shows that she will do anything for them, including the kidnapping of stars and keeping them in their eyes.

Beginning with an acoustic sound, “1121” begins singing of her child. Another song about a new perspective of love, this beautiful melody continues to build throughout its progression. “I won’t die for love but ever since I met you, you could have my heart and I would break it for you,” Halsey sings. The track then alludes to past relationships and brokenness as it transforms into a song telling her child that she would do anything for them.

“Whispers” shares the darkness at its deepest, the quiet whispers of the voices of fear that whisper in her ears as she fights for what she loves and redefines her passions and identity. The song epitomizes self-sabotage and continues to build into a gripping feeling of an internal scream.

Pulling scenes from her IMAX film, “I am not a woman, I’m a god” showcases the beautiful craftsmanship of the visuals and story and pulls you in while leaving you longing for more. The IMAX film played the night of the album’s release. See the trailer below:

Halsey’s new album showcases a new level of artistry for the musician. Not only does the story behind it offer a powerful message about the definition of love and power, but her visuals give us a taste into her world and the impact of her life and what it has to offer.

Download / stream If I Can’t Have Love, I Want Power HERE.

Another One Down! ‘Headspace’