People listen to music for a variety of reasons. Whether it’s the soundtrack to the perfect car ride or to a messy breakup, it can often be what people do to change their mindset. Sometimes, people just need music that gets them on their feet and dancing. For music fans looking to get moving, electro house duo Control Room’s new EP Heart Broken released by Soundrive Records might be the perfect score for their next wild night out.

Control Room is a Canadian DJ producer duo who have received support from artists like Habstrakt, BIJOU, and Dr. Fresch. They first arrived on the scene in 2020 with the single “Bad B*tch.” Some of their more popular releases include singles “Feeling Like 50 Again” and “Stereo Criminal.”

Their songs recently made the rotations with some pretty big music events, including the EDCLV Mainstage. They’ve also gotten some radio play from influential curators like electronic music icon Diplo on his Diplo’s Revolution satellite station, and on Insomniac Radio, the radio arm of festival purveyors Insomniac Events. Prior to this EP, Control Room recently released a remix to the song “Ferrari”, which fans of EDM music should check out to get an idea of their sound.

Comprised of three ferociously danceable tracks, Control Room released Heart Broken on December 2nd. They described their direction for this release as

“an interesting blend of UK-bass, festival big-room, [and] some real emotional music, that’s going to hit you right in the feels.”

These songs are meant to be played in large club rooms full of sweaty people ready to dance the night away. Heart Room’s sound oscillates between buzzing synth lines and thumping bass hits. Fans of acts like fellow Canadian act LNDN and Rumpus should feel right at home listening to Control Room’s latest release.

Heart Broken opens with the track “Antidote,” a track definitely ready for the dancefloor. Immediately you can hear the Electro House influence: the pulsing dance beat floods through listeners’ earlobes and resonates right in the chest. The driving instrumentation is the perfect opener to the EP.

The next track, “Half Single,” taps into familiar emotions. The song finds the vocalist lamenting about being “half single” because their girl has “got a guy.” Instead of staying at home and being upset, he decides he’ll go out and have “one hell of a night.” The song reflects an optimistic, turn-up energy, and immediately transports listeners to a soundscape that makes them feel like they’re on a night out with the crew. It opens with an airy piano that builds into a catchy hook and a booming drop.

The closer “I Need Space” ends on a high note. It features sultry, airy vocals that sound like they’re floating down from space. They don’t stay up there too long, as the song features a gnarly EDM drop with a riff that brings the listener crashing down to earth and onto the dancefloor.

Fans of EDM and house should give Control Room’s Heart Broken a spin, and check out their other tracks on Spotify. 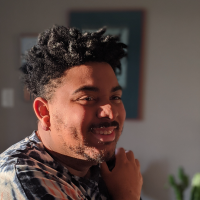 Lyndon Nicholas Author
Lyndon Nicholas is a writer, educator, and blerd based in Brooklyn, NY. He is interested in covering music, entertainment, literature, pop culture, anime, and video games. He is also currently working on a collection of speculative short fiction. Keep up with his latest work by following him on Instagram at @ezlbreezy or checking out his website https://lyndonnichol.wixsite.com/website
control roomedmelectro houseFestival Big RoomHeart BrokenHouseNew MusicUK Bass