On Tuesday night in Nashville, the stars were glowing as they walked the red carpet for the Music Biz 2019 Awards Dinner at the JW Marriott.

Rock legend Peter Frampton humbly accepted the Chairman’s Award for Sustained Creative Achievement, saying, “I am having some health problems, but I really am the luckiest guy because my passion for my music has kept me going through many, many years of up and down, up and down, sideways,” he said. “Whatever has been thrown at me… it’s all part of this lifelong dream. I live every day playing my guitar, writing music, recording and performing. Thank you for this incredible award. I don’t deserve it, but I thank you dearly.”

We were lucky enough to speak with Peter Frampton on the red carpet.

“Mr. Frampton, it is really an honor to meet you.  You have had such an amazing career, with so many hits.  You are an incredible communicator.  As you look to the future, and to your classic songs being heard by new generations, what is the one message you hope future listeners get from your songs?”

“Authenticity.  You know, everything I did, I did in the moment.  When I create music, I do it spontaneously.  I want future listeners to know that what they are hearing was real when it happened; that it was really my feelings and emotions during the creative process that were captured.“

Pop star Bebe Rexha and Country phenom Kane Brown were both honored with the Breakthrough Artist Award. During her speech, Rexha called for more diversity in the music industry, saying, “If I can leave you with one thing: we need more women executives in the music business. Only 15 percent of women in the music business actually run labels. The number is really staggering. Women deserve a chance and I will make space for them. Women will be equal to all the f**kin’ men. We need more f**kin’ women in higher spots so pay ’em extra, give ’em time, respect them. Women are the ones that have always taught me the most important information in my career.”

Brown also talked about diversity in the music industry, telling Variety on the red carpet, and the audience in his acceptance speech, “When you go to my shows, everybody looks different – they don’t look like they’re supposed to be in the crowd, so it’s a cool feeling,” said the singer, who is biracial. He also gave a big thank you to his team at Sony Nashville who “… gave me a chance and is opening doors for other people who don’t think they belong in country music,” he said.

One of the people that had a huge part in helping Brown get to where he is today, is SONY Nashville President Randy Goodman, who received the Presidential Award for Outstanding Executive Achievement. Goodman also helped catapult Country artist Luke Brown, who performed his number one hit songs, “Beautiful Crazy” and “She Got the Best of Me,” during the ceremony. 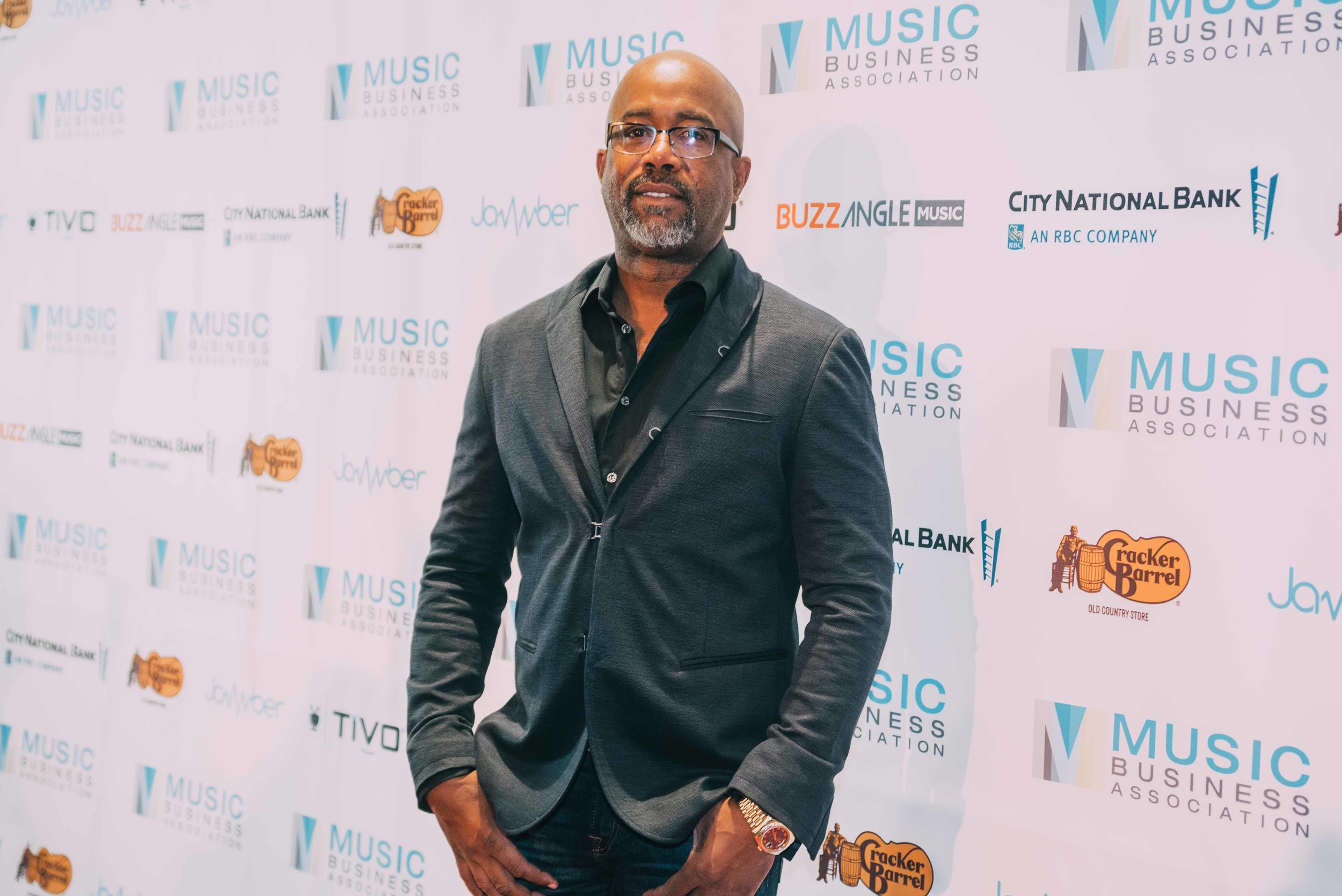 Other recipients last night were some of the most influential people in the industry: Richard Storms and Alayna Alderman, owners of Record Archives store in Rochester, NY were awarded the Independent Spirit Award; The Orchard co-founder Richard Gottehrer accepted the Outstanding Achievement Award and Giles Martin, son of Sir George Martin represented his father for his induction into the Music Business Hall of Fame.

Giles took a moment to speak with us following his entrance on the red carpet.

Mr. Martin, one thing the Beatles were obviously known for was using cutting edge technology in the studio along with advant garde recording techniques.  Where do you see what they started going today?

Well, I think the hip hop community really were the first to pick that up again and run with it.  Now, I think we are seeing technology bring what we once thought was only possible in the recording studio to larger venues and live performances.  I think that trend will continue.

This year’s conference and awards dinner were the biggest the Music Business Association has had in the last 17 years. The conference brought together some of the top executives, influencers and artists in today’s industry. With panels on diversity, law, tech, finance and even parenting, and health, Music Biz 2019 included aspects of the business and industry that no other conference has ever touched on before, in one place at one time.

Jim Donio, the iconic president of the Music Business Association for the last 30 years, was the driving force behind Music Biz. In his annual speech, Donio called upon his peers to reflect on what inspires them in music and the industry. Connecting the younger and next generations – like Kane Brown – with veteran legends – like Peter Frampton – Donio brought together the perfect combination of artist and industry at Music Biz 2019.

About the Music Business Association:

The Music Business Association is a not-for-profit membership organization that advances, promotes and invests in the future of the music business by providing a trusted forum where ideas and cooperation flourish. Through events, education and engagement, the Association brings together the full breadth of the industry for unparalleled access to networking, resources and thought leadership.

Alexandra Cole Administrator
Sorry! The Author has not filled his profile.
×

Alexandra Cole Administrator
Sorry! The Author has not filled his profile.
Previous post